Whew. There's a title, eh? But it's time for my annual tradition of a review of a Christmas-related episode. I considered "The Night of the Meek" from The Twilight Zone and "The Messiah on Mott Street" from Night Gallery for two 30-minute Rod Serling episodes. Oh well, maybe next year.

This year we have "The Night of the Whirring Death", an episode from the first season of The Wild Wild West. Which was filmed in that period of 60s TV (approximately 1966) when American TV was transitioning from black and white to color. So "Whirring Death" is in black and white, and it's a first-season episode that, like "The Night of the Puppeteer", suffers from the lack of color. 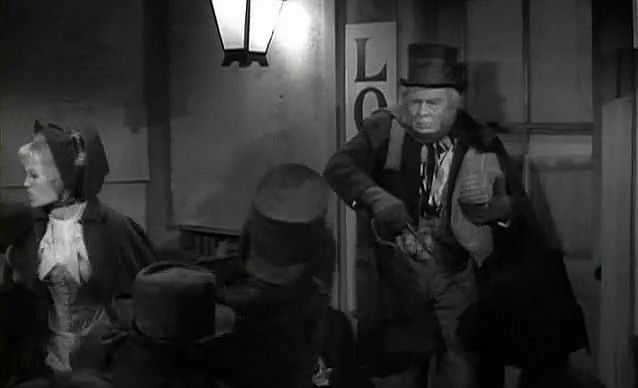 "Whirring Death" also doesn't have a lot of Christmas to it. It takes place in San Francisco 1974, but no month or day is given. And other than the toys and children in the first nine minutes, it doesn't have anything to do with Christmas, either. But the first nine minutes do have a heavy A Christmas Carol feel to them. There are orphans in the street that could have been lifted out of Dickens, and actor Norman Fell playing a very Scrooge-like Jeremiah Ratch, a miserly money lender who has a clerk (Sam Flint) who is like an elderly Bob Cratchit with a sense of humor.

I'd say let's go back a bit, but The Wild Wild West (WWW) was always a show that liked to leap right into the action and explain things later. "Whirring Death" is no exception, so there's not much to goi back to. The episode starts with an Angel of Charity, Priscilla Ames (Pamela Austin) leading the aforementioned orphans in a street chorus. Secret Service agents Jim West (Robert Conrad) and Artemus "Artie" Gordon (Ross Martin) arrive, and Priscilla catches Jim's eye. He goes over and buys toys for all the boys, then flirts with Priscilla.

The agents go into Ratch's moneylender shop, and then Ratch arrives. The orphan boys pelt him with garbage, but Priscilla calls them off and apologizes. One boy with a familiar-sounding voice gives Ratch a wind-up trio of soldiers beating on a drum, and as the other boys run off, the gift-gifting boy reveals he's Dr. Miguelito Loveless (Michael Dunn), smoking a cigar and chortling. 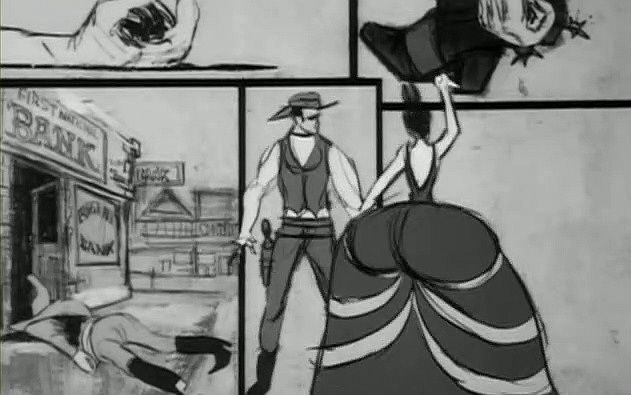 We then get the opening tag, which features The Cowboy (presumably Jim) taking on four menaces. This is the typical opening sequence where The Cowboy kisses a woman trying to stab him and she... faints?. Passes out from chloroform lipstick? I preferred the original opening when The Cowboy punches her in the kisser. It makes more sense than him kissing her into a fainting spell. Oh well.

Inside the office, Fell has a grand ole time playing up Ratch as a Scrooge-like miser, and the unnamed clerk chortles and sneaks a look at Ratch when he opens up his hidden safe to take out $5 million. The agents are there to collect $5 million from Ratch. The state of California has gone bankrupt to the tune of $10 million, so the agents are collecting $5 million each from three (so... $15 million total?) disreputable characters who are looking to earn respectability

Artie goes out to do recon, and the toy Loveless gave Ratch earlier somehow activates itself (remote control?) and is on the counter so it can walk to Jim and Ratch as Jim takes the money. The toy blows up, and Artie runs back. Loveless emerges from the shop with the miraculously unscathed bag, and Artie chases him into an alley. Loveless' giant-sized goon Voltaire (Richard Kiel) is waiting and punches him unconscious. 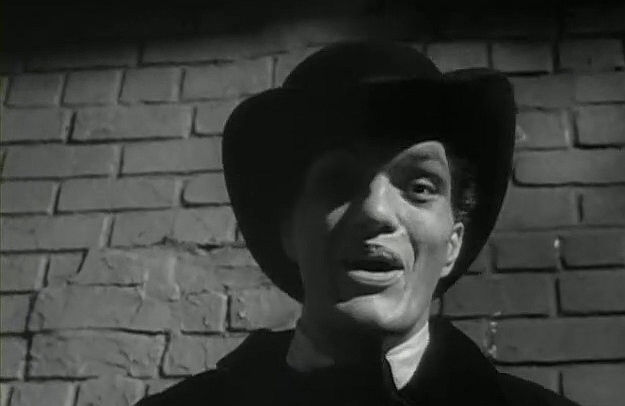 This is the last of Voltaire's three appearances on WWW. As Artie mentions later, Voltaire speaks here and that was a mistake. Voltaire is portrayed as... well, let's say "child-like" to be charitable. He was more effective as a menacing presence and a counterpoint to Loveless' chatty and diminutive genius. In any case, Loveless has Voltaire spare Artie because that's what evil TV masterminds usually do.

Governor Lewis (HITG Jesse White) arrives on the scene, and confers with Jim, who has miraculously survived the explosion. Ratch is presumed dead, and we never hear about the clerk. Lewis finds Jim in Priscilla's nearby bedroom, where she took him after they pulled his body from the wreckage. Jim flirts with Priscilla a bit and gives her a kiss. She's never had a romantic kiss before (i.e., she's a virgin), and there's some risqué dialogue for 1966.

When Lewis arrives, he and Jim discuss the whole bankruptcy in a bit more detail. Artie stumbles up and tells Jim and Lewis about Voltaire and Loveless. The agents split up to protect the two remaining disreputable millionaires from Loveless. 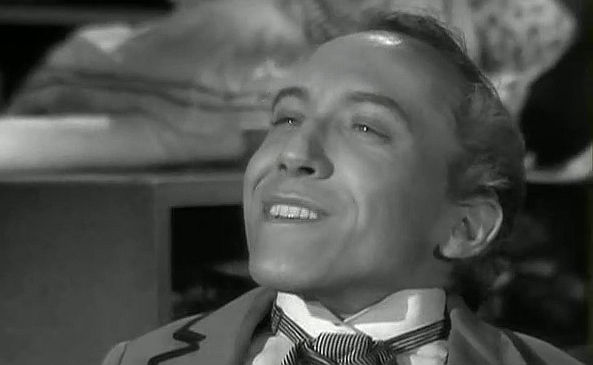 Meanwhile, Loveless has moved into the toy shop of Priscilla's grandfather. Voltaire sends a duplicate of the earlier toy into Priscilla's room, but it's a harmless model, and Priscilla knows Voltaire and Loveless. Loveless and his main squeeze, Antoinette (Phoebe Dorin), are riding on a miniature carousel in the main room of the toy shop and singing. And credit to Michael Dunn, who was always a class act before his too-early death in 1973. He was a talented singer, actor, and TV writer, and if WWW is remembered for any of its villains, it's his Dr. Loveless. Dunn's Loveless has ten times the charm of Kenneth Branagh in the 1999 movie.

This is Loveless' early days, when he's obsessed with taking back the California he believes rightfully belongs to him after it was stolen from his ancestors. Later he would devolve into a more standard revenge-seeking mad scientist, but Dunn always gave excellent performances in even the most mediocre episode he appeared in.

Priscilla believes Loveless is a kindly benefactor, and meanwhile Jim goes to see John Crane (HITG Val Avery). Crane likes playing with model trains, is apparently a crooked construction engineer in real life, and sends his thugs out to attack Jim when Jim arrives to collect the money. Which is a bit odd, since Crane is presumably expecting Jim and wants to pay him the $5 million to buy himself respectability,. But the sequence does give the stunt coordinator a chance to show off the fight choreography. And Robert Conrad always looks impressive taking out guys half again his size, two or three at a time.

Loveless sends in an exploding toy train and Jim is caught in another explosion. Crane is presumed dead. Jim wakes up in Priscilla's bedroom again. This time he realizes something fishy is going on, falls through a trapdoor, and ends up in the toy shop main room. After a brief struggle, he ends up in one of those "hit them and they pop up" human-sized clown dolls. Loveless has sent Priscilla to deliver a forged note "from Jim" summoning Lewis there so Loveless can kill him with a toy cannon equipped with darts. 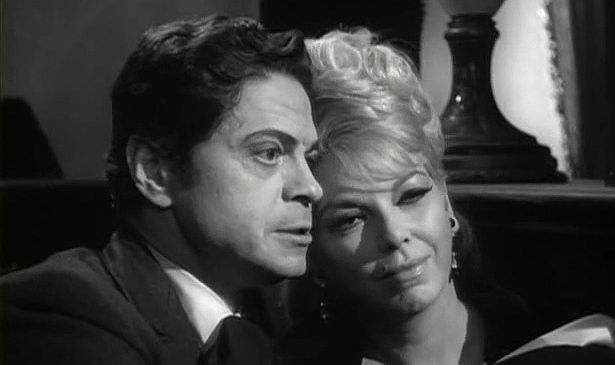 Meanwhile, Artie is protecting the third disreputable millionaire, Bessie Bowen (Barbara Nichols). Who runs a club that has gambling, and a piano player, and attractive women lounging about. Most of whom hang out in Bessie's bedroom. Which seems like a poor way to run what is presumably a brothel, but what do I know about the business end of such things? *whistles innocently*

Artie woos Bessie by pretending to be an Italian opera singer. He gets into Bessie's bedroom and first a gramophone and then a snow globe start smoking and sparking. Neither of which are "toys", but we've pretty much lost the toy/Christmas theme at this point. Bessie reveals she's staying silent because Loveless will kill her if she talks. Which doesn't match the pattern of the first two attacks. Bessie is conveniently well-informed about Loveless, and takes Artie to the toy shop.

An aside here: one of the issues with the first season is actor Martin thought Artie was supposed to be the show's hero, not Jim West. Or at least he would be an equal partner. During much of the first season, Artie is left standing out in the cold while Jim defeats the villain and gets the girl. "Whirring Death" is later in the first season, after Martin had made his complaints known. "Whirring Death" gives him an extended onscreen sequence. He effortlessly portrays a hammy opera singer, turns on the charm with Bessie (who just wants to be considered a respectable lady), and then rescues Jim.

There's a lot of fighting at the end after Jim breaks out of the clown doll. He and Artie save Lewis, beat up some thugs, but Loveless escapes on a toboggan to a waiting Voltaire and an escape carriage.

It turns out Ratch and Crane are alive but in those 60s hospital traction devices. As Loveless notes earlier, he hasn't killed anyone. Which means in an episode called "Whirring Death", there's no death. Except for the poor unnamed clerk, but they just drop him down a memory hole rather than state he's alive or dead. 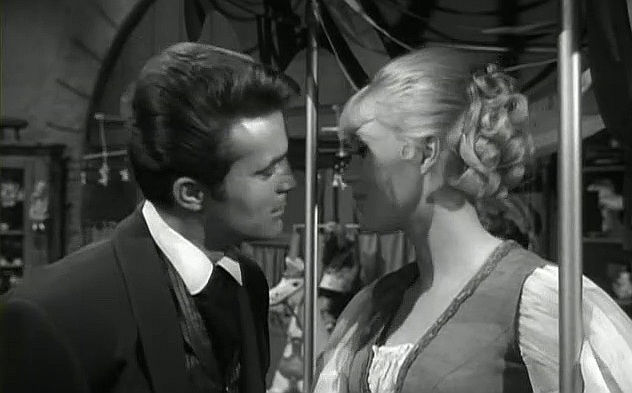 Ratch and Crane come hobbling up, Priscilla asks Jim to kiss her again, and Artie turns on the aforementioned carousel so they can spin while they canoodle. And Artie, Lewis, and Crane all look on smiling as Jim gets some. Whatever trips your triggers, guys.

And so ends another episode of WWW. There are some brief stabs at continuity, based on the fact Loveless has escaped prison before and killed some people. Which make his diligence here about not killing people or being considered a murderer odd. Dunn and Martin are the best parts of the episode. Conrad is okay as Jim: he rarely gives an above-average performance, but he appears to be having fun and always brings a certain... professionalism (?) to the fight scenes.

Watching Fell do an American version of Scrooge, with the attitude and the costume, makes the first nine minutes of the episode a lot less of a slog than they could be. He gets some good comedy bits, like his eyes lighting up when he explains the toy he was given is 100% profit, and his brief byplay with his clerk. White plays Lewis as a bit of a rapscallion, but nothing is made of it. Priscilla is eminently forgettable as a West Girl, and the writers forgot her after this episode. I can kind of understand why they made Voltaire a "gentle giant" because having Loveless with an evil ominous giant would spoil his philanthropist gig. But having Voltaire and Priscilla both be childlike types is overkill. And makes Jim look like a child molester for seducing the never-been-kissed Priscilla. 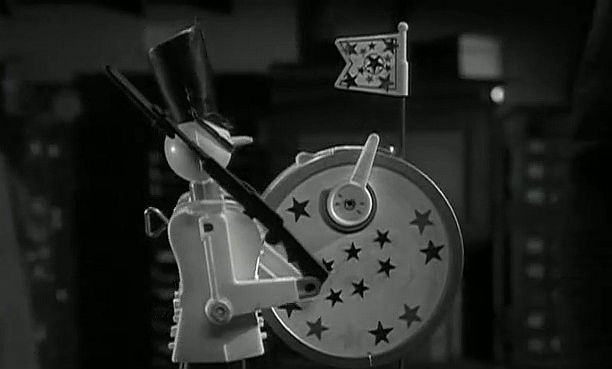 Overall, "Whirring Death" is a decent first-season episode. It's improved upon by the presence of Dunn and Fell, and Kiel when he shuts up and just does "menacing" rather than Lennie from Of Mice and Men. Kiel is a decent actor, but trying to convey a Lennie-like presence in his brief screentime while being outacted by Dunn just doesn't work. I consider the last third of the first season of WWW an often-unseen gem. By then the show had "stabilized" after going through several producers, and they had the format pretty much down. Some of the early first-season episodes are almost unrecognizable compared to later seasons, but the later ones are pretty much "typical" for the series.