Jarrett was your typical little boy, loved fishing and being outdoors. Fast forward a few years and Jarrett catches the Colorado state record for Largemouth Bass. This would be a big deal for anyone, but for this 17 year old it was the jump start he needed. After fishing many club tournaments and any other tournament he could get his hands on, Jarrett's dream came true. He was now part of the ESPN Bassmaster Top 150 Series at age 22. At age 25 he was the youngest to qualify for the Bassmaster Elite Series and was now a professional who toured and fished full time all over the US. Then the unexpected happened.

During a tournament in Georgia Jarrett felt a lump above his left collarbone. A few weeks later he was diagnosed with Hodgkin's Lymphoma Cancer. He then had a new goal to reach…beating cancer. After a year battle which forced him off the Bassmaster Elite Tour Jarrett underwent several intense months of chemotherapy and radiation. Once the treatments were finished Jarrett got the best news of his life, he was now cancer free. Today he spends several months each year inspiring Cancer patients across the country. Using the worst experience in his life to help motivate others through their toughest battles is what Jarrett Edwards is all about.

With Jarrett's near death experience it motivated him to fully live his new dream career in the TV Media field…Today at age 35 Jarrett host "Jarrett Edwards Outdoors" National TV. JEO is an award winning multi-species freshwater fishing show which airs 52 weeks per year in the US, Canada and Mexico. For the past 8 years the show focuses on the very best fisheries and personalities (Both fishing and celebrity) to give you the viewer the very best fishing information possible. Each show is jammed packed with cutting edge fishing techniques all the while filmed in multi camera HD production with live underwater divers and aerial videography. You can catch the show weekly on The Sportsman Channel, World Fishing Network and Altitude. 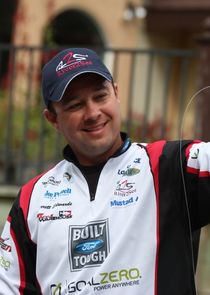