Red Eye w/ Tom Shillue is an American late-night/early-morning satirical talk show on the Fox News Channel, airing at 3:00 a.m. ET Tuesday through Saturday, 11:00 p.m. Saturday, and 2:00 a.m. Sunday. The show features panelists and guests discussing the latest news in politics, pop culture, entertainment, business, sports, and religion. The show was originally titled Red Eye w/ Greg Gutfeld and was hosted by Greg Gutfeld, a self-described libertarian. In 2007, VH1 contributor Michelle Collins described watching Red Eye as: "You almost feel like you're going out and not going out. It's like being at a bar with your friends and hearing all their opinions—while laying in bed eating Snackwell cookies". Gutfeld left the show in early March 2015 and was replaced by Tom Shillue on 22 June 2015. 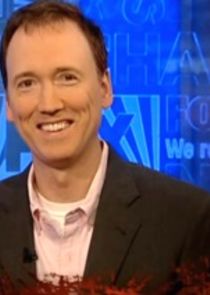