Kitchen Stadium die-hards, we have breaking news for you. Just this afternoon, Alton Brown sent this tweet, and with only one word and a single hashtag — "Finally. #IronChefGauntlet" — he announced an upcoming series. Here's what we know: Beginning in the spring of the new year, an all-new reboot of the beloved Iron Chef America is set to roll out. The name of this reimagined competition is Iron Chef Gauntlet, and as Alton hinted with an accompanying photo, he's set to reprise his role as the host and master of ceremonies. Like both Iron Chef America and its big brother based in Japan, Iron Chef Gauntlet will celebrate the highest echelon of cooking. Look for some of your favorite elements of battle from Iron Chef America, plus new twists that will leave you craving more.

The last chef standing faces almost insurmountable odds when they must cook their way through the three-round Gauntlet against Iron Chefs Alex Guarnaschelli, Stephanie Izard and Michael Symon. But in a surprise twist, the Chairman allows the challeng… 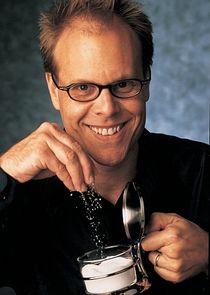