Well, I did an "The Obsolete Man" review back on May 28, 2019. And it's New Year's Day, and the semi-annual The Twilight Zone marathon on SyFy. So we have another review of an "unsung classic" of the original Zone. 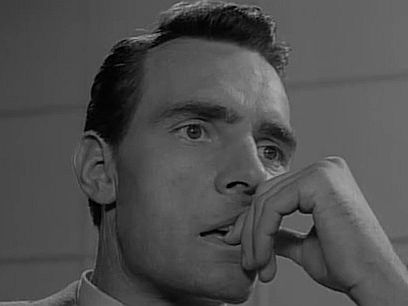 Why unsung? Like "Obsolete", "Shadow Play" is one of those Zone episodes a lot of people sorta remember, and it's a "classic" of the series, but it's not one of the best-remembered episodes. For a variety of reasons, episodes like "It's a Good Life" (Bill Mumy in a career-definining role! Part of the Twilight Zone movie), "Nightmare at 20,000 Feet" (William Shatner! Overly Cute Gremlin! 3rd Rock from the Sun parody!), "The Monsters Are Due on Maple Street" and "The Lonely" (social commentary in 1960!),"The Eye of the Beholder" (nifty twist, weird cinematography concealing the twist until it twists), "Time Enough at Last" and "To Serve Man" (infamous twists) and a few others get a lot of the attention. Heck, SyFy is burying "Shadow Play" at noon on New Year's Day, it's not getting a "prime" spot in the evening/prime-time hours.

But "Shadow Play" is definitely a classic. It's one of Rod Serling's best "Is reality what we think it is?" stories, and pokes holes and explores the concept. Unlike "Perchance to Dream" and "Person or Persons Unknown", which question the nature of what we perceive as reality but don't really make much sense or answer any of the questions they raise. Part of that is "Shadow Play" is an unending cycle. "Perchance" ends with the death of the dreamer, and "Person" ends with the identity-plagued David entering a new stage of his life with a wife that isn't his wife. "Shadow Play" ends with a repeat of the same cycle we've been told is happening over and over again. 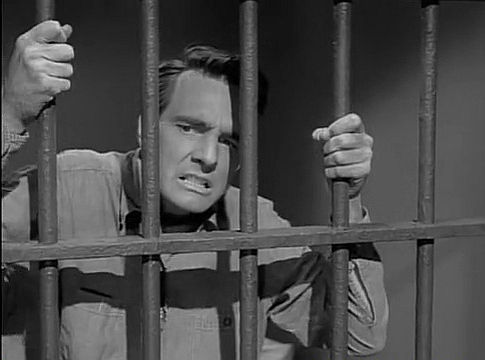 "Shadow" is also helped by the performances. Front and center is Dennis Weaver, an actor I've never thought much of one way or another. Weaver is typically just... okay. But his Adam Grant is front and center conveying panic, anger, desperation, and resignation in equal parts while providing a lot of the exposition. It's hard to say why, but Weaver expertly plays Adam as a man going through an unending nightmare. Maybe because Weaver plays Adam as an exposed raw nerve. He's a normal guy trapped in an inescapable nightmare. And relatively "minor" actors like HITGs Harry Townes, Wright King, and William Edmonson are also good playing what are literally backdrop characters in Adam's nightmare.

What is that nightmare? The episode starts with Adam in a courtroom hearing the jury foreman announce Adam is guilty of murder. We never see the murder or the trial, which is part of what we'll find out is the point of the scenario. Adam is dragged off to a death-row cell where he starts telling his fellow prisoner Jiggs (Edmonson) the whole thing is his nightmare. There's much amusement, at least to me, as Adam pokes holes in the whole scenario. As he notes, he was tried and convicted on the same day. And since he's never been in the death house, Adam has never seen a "real" execution so the whole thing is based on movies that he vaguely remembers. Jiggs is the stereotypical tough prisoner who doesn't believe Adam, and two other prisoners play the harmonica and rant about their mothers. 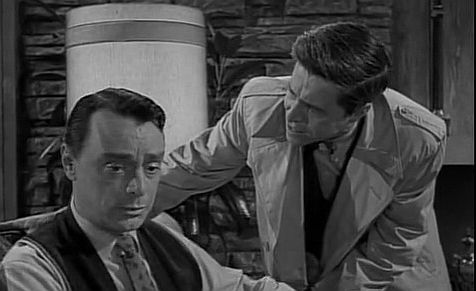 Meanwhile, DA Ritchie (Townes) received a visit from the city editor, Paul Carson (King). Carson says he's been talking to Adam (when? but see below) and is convinced Adam is telling the truth, and they'll all die when Adam is executed. He convinces Ritchie to visit Adam, and Adam lays out the plot to Ritchie. There's also a cute, but barely-noticeable, bit where Adam mouths everything Ritchie is saying since he's relived the nightmare so many times.

Adam explains the whole execution is his nightmare and he has the same nightmare every night. He can't "enjoy" it because every time, the nightmare ends with him screaming as he's electrocuted. Then the same execution nightmare starts up the next night Adam sleeps. The "world" resets and the same events play out although the characters have their faces moved to other characters. As we find out later when a priest visits Adam, many of the "people" are real-life people from Adam's past that even he barely remembers.

Ritchie isn't convinced, but Adam somehow changes the dream reality enough to change Ritchie's dinner when the DA returns home. Between that and Carson's begging (Carson is afraid he'll die when Adam does), Ritchie decides Adam is mentally incompetent. The DA calls the governor to get a stay of execution but it's too late: Adam is executed and the whole thing starts over. However, this time Ritchie is Adam's defense attorney, Jiggs is the trial judge, and Carson is the jury foreman.

"Shadow" is an episode that wouldn't work in the 2019 newer format. Expand "Shadow" to an hour and it loses much of its charm. As I noted with "Obsolete" in my earlier review, "Shadow" also feels like Serling describing a recurring nightmare he had. Even though the episode is written by Charles Beaumont, who had his own issues (and died tragically young and in deteriorating mental condition), it has Serling's fingerprints all over it. But if you've read Beaumont's work, you can tell "Shadow" has many of the same themes as his own stories. That, and Beaumont was in the waning years of his career (he died in '67) and was being shadow-written by a lot of his friends. Including... Serling. So "Shadow" feels like a combination of Serling and Beaumont. Which is good. Serling tended to be a bit talky, so working from Beaumont's script keeps the talkiness down.

I also like the episode raises so many issues but never tries to answer any of them. Carson and Ritchie, for instant, apparently have fully-realized lives. But it's all created by Adam's nightmare-imagination. Heck, Carson may only be remembering the "conversations" he had with Adam. Did Adam "dream" up all of the memories of all the characters in his dream? What about the ones he's not involved with?

When you dream, how much reality do the characters in your dream have? Do they have whole lives? Do they just think they have whole lives? Did they exist before you dreamed them? Are you creating a dream-world, or tapping into alternate dimensions? Which reality is more "real" for Adam: the nightmare he lives through every night, or the life he has when he's awake (that we never find out anything about). Are we characters in someone else's dream? How would we know if we were? Is Adam a man dreaming he's a butterfly, or a butterfly dreaming he's a man? 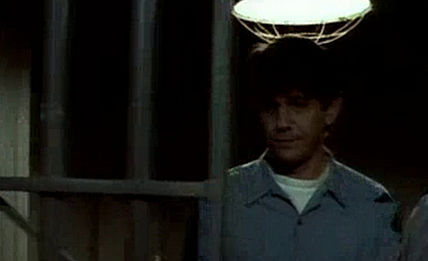 "Shadow" was later remade for the 1985 Twilight Zone. It's still a strong episode, because it's a strong story. It's not quite as good as the '61 episode: we know the twist, and Peter Coyote as Adam Grant is no Dennis Weaver, he doesn't quite convey Weaver's desperation. Both episodes are still worth your time, but the '61 version is the better because of Weaver's performance, the shadow-play cinematography (by director John Brahm), and the shock of the first one being the first one while with the remake... you know what's coming.