The production company behind the hugely successful UK reality series The Great British Bake Off have revealed that the current seventh series of the show will be the last to air on public broadcaster BBC One. The statement released by the BBC and Love Productions can be found below; 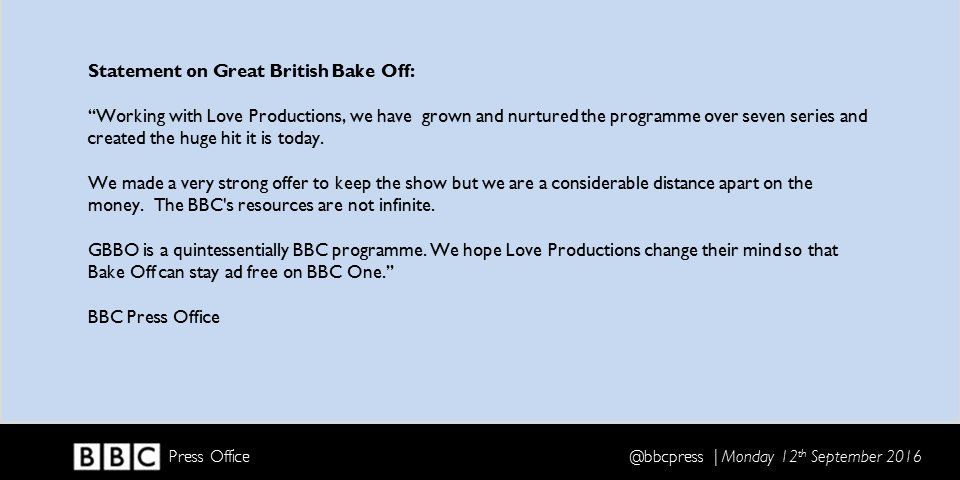 The show will be moving to fellow free-to-air network Channel 4 but is currently uncertain if presenters Mel & Sue or judges Paul Hollywood or Mary Berry will also make the move. Channel 4 are believed to begin airing a new celebrity series in 2017 in aid of their charity event Stand Up To Cancer. A statement has been released by their press office and can be found here.

The BBC gave up on the show because the current contract was coming to an end and they refused to pay the increase demanded by Love Productions to keep the series at the BBC. Given the simple format of the show, it shouldn't be too hard for BBC Productions to come up with a program in a similar format in-house, using the stars of GBBO who have stayed with the BBC.

The show is basically 'The Apprentice' with ovens anyway, isn't it? Surely, a few tweaks here and there and they should come up with something sufficiently different to keep them out of court.

Sounds like the producers got both more money and guarantees on a number of new series that the BBC couldn't match.

The fact that this show is on BBC is what made me like it. I hate adverts and I enjoy GBBO without ads. Bad move.