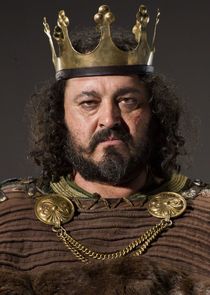 He is a forceful, self-assured, courageous, proud and resilient character, a king respected by his nobles, a pious Christian with a vulnerability on the spiritual level and he is determined to fend off this unprecedented threat to his people and his kingdom but is relatively unambitious and peaceful when unprovoked. Yet he is a typical medieval monarch with all the limitations that come with this worldview.

Therefore, he finds out quickly that he cannot match Ragnar's extraordinary tactic intelligence. His failure to drive the Vikings out of his kingdom leaves him deeply shattered in his trust in divine support and protection as his defeats are intelligible at best as a divine punishment for sins and transgressions as suggested by his bishop and he struggles with the spiritual insecurity arising from this option, growing ever more anxious to obey any religious regulations to the letter throughout the show until his final despair in the face of the Great Heathen Army in 4x18.

After having been humiliated in his own hall and blackmailed into paying a fortune in order to rid himself of the Vikings, losing his brother who is murdered by Ragnar in the process, King Aelle swears vengeance, promising to bring Ragnar "to justice and to death" one day. He thus turns into the deadly enemy, main Saxon antagonist and nemesis of Ragnar, finally keeping his oath in 4x15 when he has Ragnar executed for his crimes against the Northumbrian people in a pit of venomous snakes. However, he has to wait for that some twenty years.

After his ill-fated first encounters with the Vikings, King Aelle understands that he cannot protect his kingdom against an extraordinary mind like Ragnar alone. Therefore, he allies with another Saxon king, Ecbert of Wessex, in the second season, being won over to trust him only by the most reliable bond possible in those days, a marriage alliance between his daughter Judith and Ecbert's son and heir Aethelwulf. This strategy works and the allied forces of Northumbria and Wessex manage to defeat a combined force of two Viking earls and a king, led by King Horik, Ragnar and his former wife Lagertha (now acting as Earl Ingstad). However, it turns out quickly that Ecbert does not feel much love or respect for his newly won ally and friend King Aelle when he not only persuades the Northumbrian king to employ the Vikings for their own goals instead of annihilating them as suggested by Aelle (which would have been the better option as it turns out later) but also sends him to the Viking camp as a hostage during negotiations.

While the deal with the Vikings - their men as auxiliaries in a war against Mercia in exchange  for a piece of land in Wessex to settle down - seems to work into the third season, King Aelle starts to worry about his daughter's demeanour as he now has to rely on Judith not only to uphold his alliance with Wessex but also to continue his lineage, obviously having lost his sole son and heir. As Judith is not up to the responsibility that comes with her privileged position, rather striving for personal happiness and falling prey to Ecbert's manipulative skills, King Aelle comes to the bitter realization that his daughter has completely gone over to his ally turned enemy Ecbert and is committing unspeakable sins at the court of Wessex in season 4. When Ecbert finally shows his real face, breaks his alliance treaty with King Aelle, taking over Mercia alone by ruse rather than by force with the help of Aelle's troops, and humiliates his ally in public at his coronation as the King of Wessex and Mercia, the alliance between Wessex and Northumbria is officially over.

As Ecbert has also betrayed Ragnar by having his settlers in Wessex slaughtered, the Viking wants to take revenge on him after ten years of absence from his capital and family. When nobody but his youngest, crippled son Ivar wants to accompany him, he buys a crew for a ship, sails to England and delivers himself to Ecbert in order to have himself killed, so his sons will have the duty to avenge him. Ecbert, meanwhile a fearful and sentimental old man, does not want to kill him and hands him over to King Aelle who thinks that God has finally decided to restore the order of the world, using the King of Northumbria as his instrument to execute justice and to remove the threat Ragnar has been posing all along. He tries to break the Viking in order to show his people that he is just a human being who does not need to be feared as if he had supernatural powers but not even now is any satisfaction coming his way and King Aelle has once more to overcome an unsettling experience with Ragnar and the metaphysical doubt arising from it. However, Aelle has never been a man to give up in the face of adversities and setbacks and manages to pull himself up by prayer time and again.

After the execution, he seems convinced that God is on his side now and that without the extraordinary mind of their leader, the Vikings can be defeated by mere numbers and conventional tactics. It is obvious that King Aelle does not expect the Viking revenge expedition to Northumbria to be more numerous than their allied forces back when they attacked Wessex and he might even hope to get away without much of a battle as Ragnar himself apparently had not been able to bring a strong force or any of his able-bodied sons to England himself.

Hence, he does not pay much attention to Judith's warning. In fact, she has nothing to relate but rumours and as King Aelle always has been aware of the intricacies of psychological warfare, is not a fearful type of person and has to expect some ulterior motive on Ecbert's part, he cannot be persuaded to bow down by reinstating the alliance Ecbert has destroyed many years ago. When he finally realizes that his army is outnumbered beyond hope, it is the death blow to King Aelle's faith - a situation that leaves him vulnerable without his main source of mental strength when he is exposed to cruel humiliation and torture by Ragnar's sons.

Utterly broken and intimidated, the unfortunate Northumbrian king is subjected to the blood eagle torture, his full force erupting for a last time in epic screams while he suffers through this ordeal towards a lonesome death in agony and total despair. His corpse is hung up in the trees and no burial scene or mourning by his relatives has been broadcast nor is there any information available about the fate of his wife (who clearly liked him) and his younger daughter.

In summary, King Aelle's is a tragic figure as he does not have many options to choose from and cannot avoid repeated failure due to his cultural and personal limitations. Compared to most other male characters on the show, despite his forceful and explosive personality, his acts are nit especially aggressive or cruel and always aimed at achieving a justified goal. He is a fairly capable king which is clear from the fact alone that he has managed to stay on the throne of Northumbria over decades, good ruler to his people who seem to be inntune with his mindset, a responsible father and grandfather, a delightful father-in-law, a loved husband and a trustworthy ally, always trying his best to do his duty and to uphold his honour, yet bound to fail time and again due to unusual new circumstances and the bad luck of having to face two extraordinary, ruthless minds who cruelly play him, unstoppably approaching his certain doom step by step despite all his attempts to change the course of his fate.

His reputation of being unlikeable is mainly due to his medieval attitude, his often bad temper evoked by his many setbacks and the awful treatment he receives by friend and foe throughout the show and to the fact that he kills the protagonist Ragnar Lothbrok in the end.