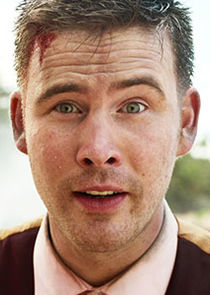 As the only surviving member of the Lotus Airlines flight crew, Owen is the de facto leader on the island -- even though he's barely equipped to be a "waiter in the sky" (his words, not ours). Having served as a flight attendant for most of his adult life, Owen's existence as a comfortable loner is about to be shattered by the forced intimacy that comes with depending on strangers for survival. In other words -- the island is his nightmare.