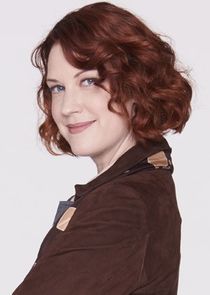 A smart, savvy and fearless redhead, Frankie Drake, 30s, is a new detective for a new world. Raised in Toronto by her small-time grifter father, Frankie longed for adventure. After his death, she found it living abroad in Europe and the Middle East. When WWI broke out, she became a dispatch messenger, riding a motorcycle across war-torn countrysides in order to deliver crucial messages to the front lines. Frankie's skill and daring attracted the attention of her commanders who recruited her to work as a spy. Her final mission saw her return to Toronto where her cover was blown. Unemployed and looking to put her unique skill set to work, Frankie established Drake Private Detectives, the city's first all-female detective agency. With her associate Trudy Clarke, Frankie takes on the cases the police can't crack and more traditional detective agencies aren't interested in — solving them as only a modern woman who "colours- outside-the-lines" can.