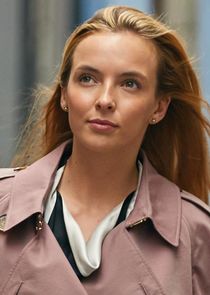 The two women becoming mutually obsessed, sharing what has been called a "crackling chemistry... between bitter enemies and would-be lovers".[1] Agent Polastri tracks the "utterly unforgivable" assassin Villanelle across Europe, not as hero and villain but as "two broken women whose flaws bind them together in a twisted pas de deux".[2] As the series progresses, Villanelle's backstory is revealed: she is an orphan with a violent reputation who once developed an obsession for an older, nurturing, French instructor—and who castrated the instructor's husband because of Villanelle's jealous infatuation with her. She works for an organization called the Twelve

Villanelle possesses a cold brutality under her innocent-looking exterior. Contentedly living outside any human moral code, Villanelle kills with flair, recklessness and absolutely no conscience.

She can be adorable, playful, funny, frightening, warm, chilling, vulnerable, impenetrable…anything you want her to be. She's trouble – and she takes great pleasure in pushing the boundaries with her eternally patient handler Konstantin.

Paid with a lifestyle; a comfortable living expense, her own apartment and a wardrobe to literally kill for, Villanelle glides freely through the streets of Paris, an understated beauty who can be both breath-taking and anonymous.

Villanelle had nothing before she was trained to become a purpose-built killer. Her instruction is to, without question, assassinate individuals around the world. She doesn't care how many people have to die; this has bought her a lifestyle she loves.

Villanelle outwardly appears charismatic and charming, funny, polite and engaging yet she has a look in her eye that seems to go on forever...something dark that's hard to name. It's impossible to know what she is thinking or feeling, because something is missing.

She has an impulsive side that lets her down. Her ego requires her to feel invincible and essential, and then there's a certain kind of woman...early 40s, dark full-bodied hair, no make-up, ill-fitting clothes, a quiet kindness. Any or all of these things could tip her into orchestrating her own downfall.

In her world, she is a masterful assassin with her own inimitable style. To the security services, she is a pest – and potentially a lead to the shady organization she works for.

Villanelle lets Eve get far too close; close enough that Eve stabs her. Villanelle had become so reckless that her precariously curated existence started to unravel. Villanelle may be a masterful assassin with her own inimitable style but now she's injured by her obsession, Eve. Villanelle is alone, bleeding out, and hunted.[3]