In a pit, under a kettle, or in between hunks of heavy metal, Roger's showing off three flame-licking good feasts that are packing high heat. In North Bend, Oregon, cooking with fire isn't a trend, it's a time-honored tradition. Chief Don Ivy of the Coquille Indian Tribe has been hosting impressive salmon bakes for 25 years inspired by the customs of his ancestors. He shows Roger how to roast 200 pounds of salmon on sticks, and they build one of the biggest fires in Man Fire Food history. Then, Roger makes his way to Old Post Office Restaurant in Door County, Wisconsin, where they cook local fish in a cauldron and lights it up with an explosive wildfire. And, in Napa Valley, father-daughter team built a towering outdoor oven in the middle of their family vineyard. Roger helps them bake whole fish in a California King-size salt bed between not one, but two raging fires. 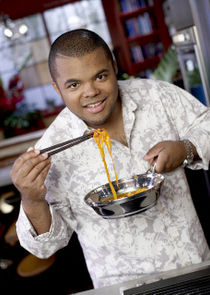