AMA Supercross is a motorcycle racing sport involving off-road motorcycles on an artificially-made dirt track consisting of steep jumps and obstacles. Professional supercross contest races are held almost exclusively within professional baseball and football stadiums, although one contest is held at a major motorsport venue (Daytona International Speedway) in the island that separates pit lane from the circuit. Supercross is a very technical sport. Supercross was derived of Motocross. While Motocross and Supercross are similar in many respects, there are significant differences as well. For example, the Supercross races are heavily advertised and televised motorsports events held within major cities.

The sport Supercross is tailored to the TV spectator, as result of widespread television coverage, as its target market. The term "Supercross" was coined as the event name for the first organized motocross race that was successfully held inside a stadium in the United States. In 1972, racing promoter Mike Goodwin and Terry Tiernan, president of the AMA at the time, staged what they called the "Super Bowl of Motocross" inside the Los Angeles Coliseum in Los Angeles, California. This event was won by Marty Tripes at the age of 16. That initial contest featured many of the top Motocross riders of the time. It was such a commercial success that it spawned many imitators, and the term "Supercross" was coined to identify the similar to Motocross stadium cycling events. Modern Supercross races are sanctioned and governed by motorcycle associations, the main series being either the American Motorcyclist Association which is the oldest and most prestigious cycle racing organization (in America), or the Monster Energy series of Supercross Championship events that are in part the work of Clear Channel, who in 2004 contributed expertise in filming on-track gate event competition for Supercross. 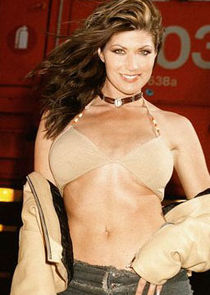 as Herself (Pit Reporter)