After taking on the South's worst critters, North America's favourite exterminator and pest control expert, Billy Bretherton, has left Louisiana behind, taking on a new challenge -- the biggest, baddest pests and wildest animals of the Great White North.

Billy's ingenious methods, mixed with his hands-on approach, always get the job done. In each episode of Billy Goes North, Billy partners with a local exterminator, or his dispatcher Bea, to tackle Northern pest problems. Billy travels from cities and suburbs to rural towns, farms and into the wilderness. From wolves preying on livestock and beavers flooding country roads to evicting porcupines from a northern cottage and escaped exotic animals running amok, no job is too difficult for Billy. Along the way, Billy teams up with local exterminators who have earned their stripes handling the North's wildest beasts. Whether the job requires time-proven methods, spanking new technology, or Billy's own home-grown style of animal psychology, he'll never leave his client's pest dilemmas unsolved.

Billy Goes North follows Billy in his new northern element. After adding an impressive set of new skills to his pest-fighting arsenal, he is ready to take on whatever the untamed North has to offer, including crazy, out of control critters, and gnarly animals that other exterminators cannot or will not handle alone.

Billy gets a panicked call from a young animal-lover who inadvertently allowed a pair of reindeer to escape from a local petting zoo. Billy and Bea have to think fast, using ingenuity and muscle to gain control of the defiant animals. Then Billy goes… 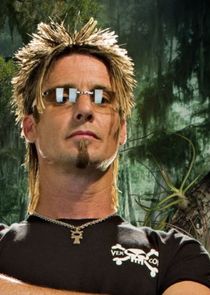