Well, they can't all be winners. 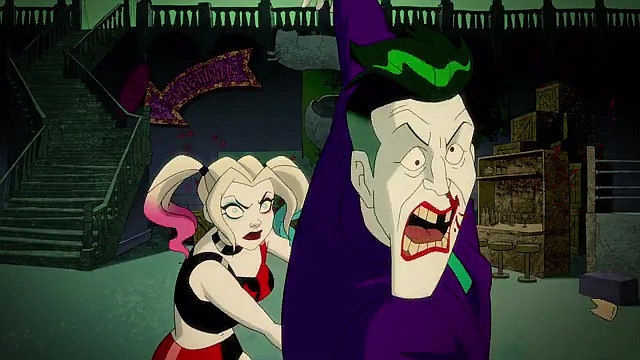 "Being Harley Quinn" starts promisingly enough as Harley and Ivy look for a new lair. There are a couple of jabs at skull-headed mountain lairs and Mr. Freeze's frozen ice castle of the week. But then the episode gets... "deep" as Harley goes into brain-freeze and her crew--Ivy, Dr. Psycho, Clayface, and King Shark--go into her mind thanks to a little mental whammy from Psycho.

What follows is a pretty standard "Let's see the protagonist's mind from the inside" TV fare. Harleen had a rough childhood. Harleen gave the finger to her class when giving the valedictorian graduation speech. Joker pushes Harleen into a vat of acid to bleach her skin and "make" a girlfriend. 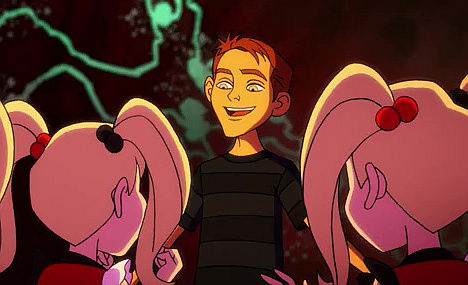 Except the last part is a bit glitched at the moment when Joker actually pushes Harleen. But there's not much time to explore that, because a bunch of child Harleens attack the crew and chase them through Harley's mind. We do get a weird cameo from Frankie Muniz as an eleven-year-old version of... Frankie Muniz. Who Harleen was in love with.

Eventually the crew (minus Clayface, who has lured the Harleens away by disguising himself as Frankie Muniz) make their way to Harley's repressed memories. Harley and the viewers find out Harleen jumped willingly into the acid in return for Joker's love. Harley enters her memory-self and beats Joker up, insisting she made herself. It turns out, Clayface managed to slip away from the killer Harleens, and the entire crew get out of Harley's mind just before they get incinerated.

Get incinerated? Yes, Sy the landlord (Jason Alexander) has called up his former spy partner Gilda (Rhea Perlman) to help him dispose of the comatose crew members. We get a relatively large number of scenes of Sy and Gilda struggling to dispose of the bodies in a pizza oven at an abandoned mall. I didn't find Sy that funny in the last episode, and we get even more of him this week, along with his weird partner Gilda. The character is apparently someone from the Harley Quinn comics, which I don't read. I hope Sy is funnier in them than in Harley Quinn. 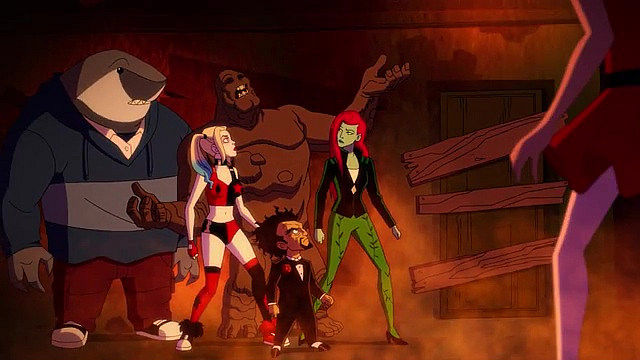 Everybody has their little moments: Dr. Psycho is... psycho. Clayface is hammy. King Shark is gee-gosh-enthusiastic about everything. Poison Ivy is long-suffering, and Harley is... Harley. But the creative team has apparently found its groove with the core team of Harley and Her Crew. Hopefully they'll shake things up a little bit: there's a certain thrill in seeing Batman, and Superman, and Wonder Woman tossed into the "world" of Harley Quinn. As well as relatively minor characters like Kite Man, Queen of Fables, Maxie Zeus, and Robin III. Or IV, or V, or whatever the heck he is.

Next week's title of "You're a Damn Good Cop, Jim Gordon", promises the return of what is probably the funniest character on the show so far: Christopher Meloni as the over-caffeinated Commissioner Gordon we saw in the first episode. It's hard to imagine they can play the character as irrationally excitable and demented as they did in the pilot. But we'll see.