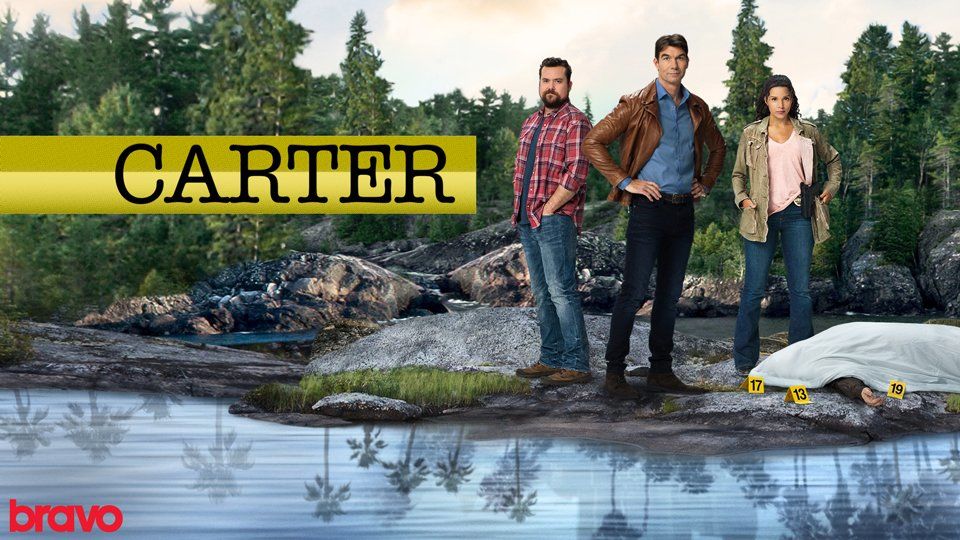 Set in Bishop, Ontario, Carter is a brand new 10 part crime drama series starring Jerry O'Connell as Harley Mackay, a detective on a hit American TV show who is forced to return to his sleepy hometown after an embarrassing public meltdown in Hollywood.

For eight years he's been the centre of a number-one crime drama and been part of a fairy-tale Hollywood romance with supermodel Winter Wood, but now life has changed completely for Harley Mackay.

Once back in Bishop, it's difficult for Harley to get people to see past his TV character and take him seriously, including his two best friends, Sam Shaw (Sydney Tamiia Poitier) and Dave Leigh (Kristian Bruun), who think he might be having a mid-life crisis. The mayor sees the famous TV detective as a potential tourist attraction for the town while the police chief wants him nowhere near a crime scene.

But burnt out in Hollywood, Harley has turned a corner in his life and wants to prove that he's more than a pretty face. It's time for him to show the world he doesn't just play a detective on TV, but can solve real crimes... including the mystery of his mother's disappearance 25 years ago...

I must admit, I wasn't even aware of this series until a few days ago when I was given the opportunity to view a screener of the first episode, Koji the Killer, but I thought I would give it a try, as I'm a fan of Jerry O'Connell. I was pleasantly surprised! Right from the start, I could tell I was going to like it.

OK, so it's not the gritty crime drama's a lot of people are probably more familiar with. What we have with Carter is more suited towards family viewing (At least, that's the impression I got from the opening episode). Think Psych meets Castle and you're probably not far off. I absolutely liked it enough to look forward to the next episode.

Carter starts Tuesday May 15th at 8pm on Bravo in Canada. UK viewers, set your reminders, as it will air on the Alibi channel Wednesday June 13th at 9pm.

Will you be watching it? Please, share your thought below. I look forward to reading them.

As I noted a few days ago in the forums (https://www.tvmaze.com/threads/3248/carter) ... Sadly, Denis Akiyama who played Koji Yasuda on the show has passed away at age 66. He had that "where do I know him from" type of face ... was in a lot of things you may have seen/heard over his career.

I liked it. It wasn't an OMG this is the greatest show ever moment but it was a good show, good acting with a interesting enough twist/hook to help set it apart. I'll definitely be giving the second episode a look and hope they can continue to impress through out the run. Least people think I'm being a homer since it's set in Canada ... Canada or being Canadian doesn't really play a big part of the show ... it's just a show that happens to take place in Northern Ontario ... with a few tweaks this could easily be set in Minnesota and I think it would be just as enjoyable.

I will check it out.. I always like Jerry O'Connell ! The story of a tv star having to go back to his home town, does remind me of a show Rob Lowe did a few years ago.. "The Grinder"' Hope this one turns out better than that one (although that was fun too) !

For some more behind the scenes info ...

I hadn't heard of this till now. Looks good enough to give it a shot at least. I liked The Grinder (https://www.tvmaze.com/shows/2277/the-grinder) so I assume I'll probably like this.

This tv series is interesting i have watched already 4 episodes and it's kind of an interesting concept and sometimes funny one.