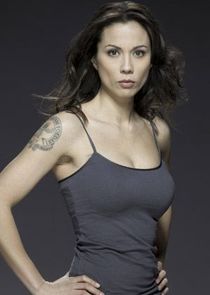 Attractive and cunning, Sonya is a survivor and an opportunist. She began as a research scientist for the corporate military. Her interest in genetics was born from a desire to create a stronger human that could survive the next great disaster. It wasn't long before her experiments became morally questionable and highly controversial.

Sonya was the architect of the super soldier program and was pushed to drive her test subjects to the point of death in order to satisfy her superiors. In order to survive she numbed herself to the reality of what she was doing. But something shifted for her when she met Travis. At some point she ceased seeing him as merely a test subject, a lab animal, and instead became drawn to his intensity and power. When her superiors decided to terminate the program and all the test subjects, Sonya felt a need to protect Travis and the others. For the first time in her life she chose to reject the privilege and security the corporation had always offered her and switch sides.

But now, trapped in our time, Sonya is beginning to chart her own ideological path. Will this bring her closer to her Liber8 allies or create a deadly wedge between them?"