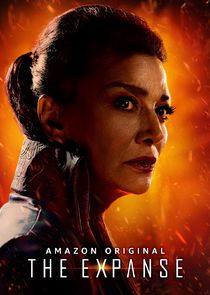 A master politician and maneuverer, she achieved one of the highest ranks in UN government without ever standing for election. She manipulates those in the highest seats of power through careful cultivation of relationships with the spouses, friends, and staff nearest to them. She belongs to a longstanding political dynasty on Earth, dating back to the early days of planetary exploration and colonization. Martian separatists assassinated her father during a period of social unrest. Her son, a Marine, died in the line of duty while defending Earth from Belter revolutionaries. Avasarala will do anything it takes, and pay any price, to defend Earth, which she sees as the cradle of humanity.