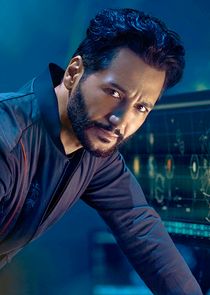 A pilot for the Pur'n'Kleen ice hauler, the Canterbury (which supplies water for the Asteroid Belt's residents). Having grown up in Mars' Mariner Valley, Alex was raised with the incongruous Texas drawl that has caught on among the largely Indian and Chinese population who live there. Unlike the rest of his sizable family on Mars, Alex looked at the generations-long terraforming project with a sense of restlessness and dread. He just couldn't bear the thought of whiling his life away on a project he would never see completed. With dreams of flying fast attack gunships, he enlisted in the Martian Congressional Republic Navy. After his tour ended the call of adventure proved too strong to resist. Signing up with Pur'n'Kleen gave him the chance to visit the farthest reaches of the solar system.