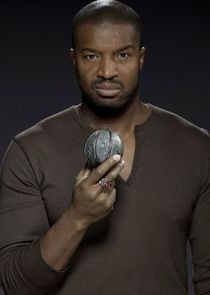 Travis is a warrior specifically trained and enhanced through futuristic science to be a lethal killing machine. He began as a conventional soldier; tough, agile and just smart enough to be resourceful. He was handpicked to be part of a special military experiment to create an elite group of super soldiers -- genetically enhanced specimens whose sole function was to follow orders without question and to destroy the enemy without remorse.

Travis is also driven by a need for revenge. He is enraged by the way the corporate military that trained him was so willing and able to cast his life aside. Realizing that he wasn't the only one. He saw how the corporations took the freedom of choice away from all individuals. Treating them as possessions and not humans. It will become clear as time goes on that there is an intellect buried within this beast of a man. He was very swayed by Kagame and his calm philosophical drive.