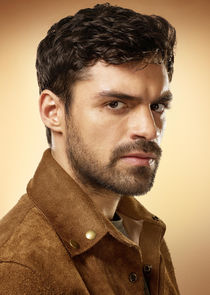 Marcos has the mutant ability to generate and manipulate light from his body, primarily his hands. He can generate enough light to see by, blind one or more opponents, or focus his further into laser-like blasts capable of cutting through concrete. Marcos ran with a drug cartel for several years and was involved with the cartel head's daughter Carmen, until he grew disgusted with the drug trade and left to join the mutant underground. With John Proudstar, Marcos is one of the leaders of the resistance.