I must wait for the sunrise. I must think of a new life and I mustn't give in... 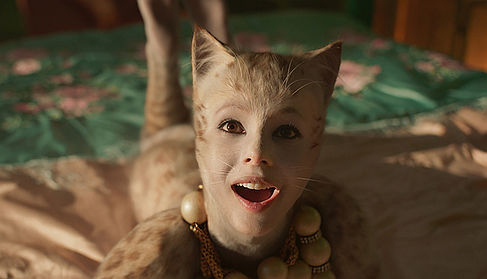 Okay, it's not much of a connection but Cats is Cats. Everyone has heard of the current dumpster fire that is Cats: The Movie Musical, right? If you have, don’t associate it with "The Cats of Paradise", the "Cats" episode of Maverick. Because the latter is pretty darned good.

Speaking of memories, I don't remember much of Maverick. The show ended before I was born, which means I never saw more than a few episodes in syndication while staying at my grandmother's trailer. She got signals from distant TV stations and the local stations didn't carry the "cool" stuff.

But enough about my childhood. "Paradise" is probably the "purest" episode of Maverick of all the ones I've seen before. Episodes like "Shady Deal at Sunny Acres", "Two Beggars on Horseback", "Gun-shy", and "Pappy" are the ones that get all the attention and fame, on James Garner and Jack's Kelly's "favorite" lists, and the TV Guide Top One Hundred Greatest Episodes of All Time. And they are great episodes. But "Paradise" is closest to what I always thought Maverick was. And what the 1994 movie focused on. Which is Bret Maverick (or Mel Gibson essentially playing Bret Maverick) having wacky adventures and conning everyone while getting conned himself, all while trying to out-con himself out of someone else's con. 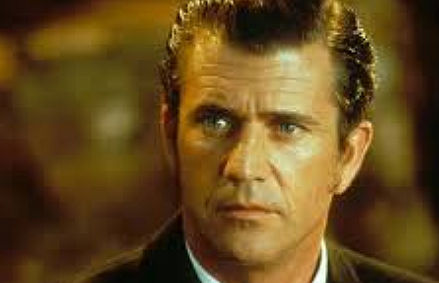 Although how about Maverick 2, with Gibson's Bret taking on CGi-furred "cats"? Sounds like a box-office winner: Deuteronomy is Jewish, right?

"Paradise" starts with Bret trying to make a quick buck by meeting up with Modesty Blaine (Mona Freeman), a fast-talking Southern belle who convinces Bret to part with the $1,000 bill pinned inside his jacket. In return, Bret gets a half-interest in Modesty's cat-selling business. She's going to sell cats to the mining town of Paradise, which is overrun by rats and mice. Modesty and Bret can buy the cats at $2 and sell them at auction for at least $50 each, making a tidy profit.

However, Modesty decides to double-cross Bret, and hires a bartender who runs a shanghai business. Bret easily breaks free of the captain he's sold to, then rides to Paradise. Modesty is already thick-as-thieves with Mayor Bemus (Wendell Holmes), as well as local sheriff, Scratch Madden (Buddy Ebsen). This is back before Ebsen cultivated an image as an easygoing presence on The Beverly Hillbillies and Barnaby Jones. Here, he plays a crooked sheriff who is absurdly superstitious because he was playing poker with Wild Bill Hickok when the latter was shot dead. 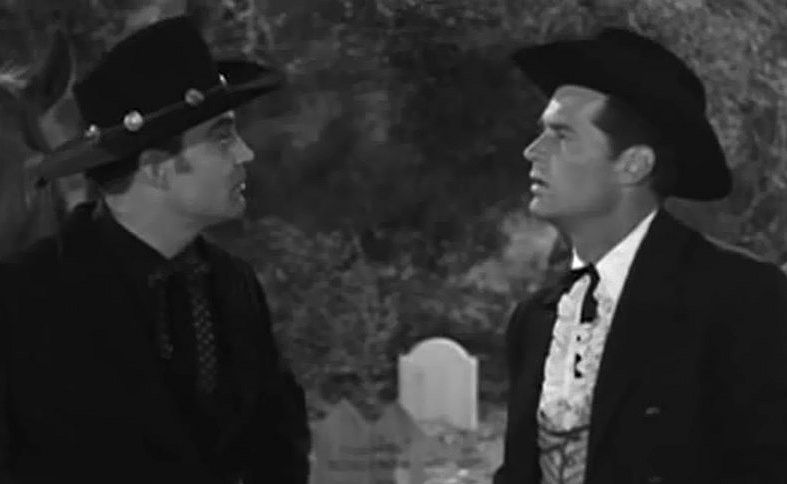 When Bret asks for his money back, Modesty turns to Scratch, who, it turns out, she's engaged to. Scratch runs Bret out of town, where he comes across Faro Jack Norcross (Lance Fuller). Jack is a black-clad gunman who says he's all out of business cards, which makes him sound like Paladin from Have Gun, Will Travel. But there's no physical resemblance, and Jack is more of an unprincipled scumbug (and friend of Bret, if that isn't redundant) than Paladin ever was.

It turns out, Modesty has hired Jack to come to Paradise and kill Scratch. So she's double-crossing him, and double-crossing Bret. And wooing Bemus, who she probably has plans for as well. How this nets Modesty a profit is never revealed, which makes her often seem like a force for chaos rather than a cold-hearted conwoman.

Fortunately for Bret, Scratch refuses to even look at the town cemetery. So Bret and Jack hide out there and play poker, and Jack vaguely agrees not to shoot Bret because of their friendship. Jack rides into town and blatantly cheats in a poker game against Scratch. And Scratch... shoots Jack dead. Exit Jack. 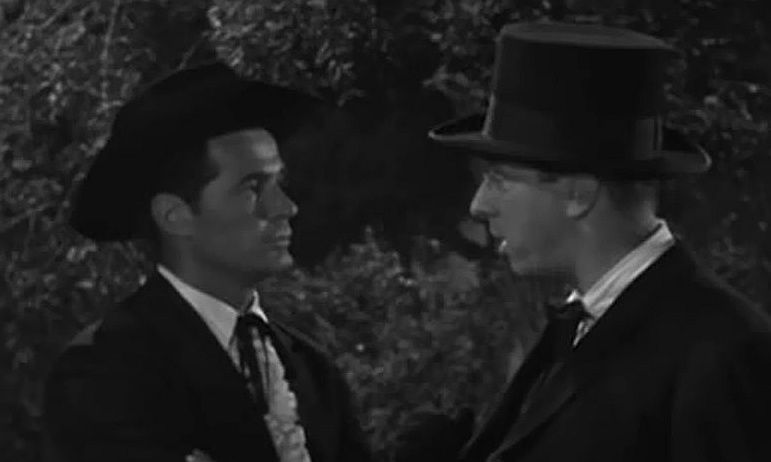 However, there's a wacky undertaker, Floyd Gimbel, played by Richard Deacon. He's paying more protection money to Scratch than the other townspeople (because he brings Scratch more business), and hires Bret to dispose of Scratch. Bemus is also paying protection money to Scratch, at a higher rate than Gimbel is. Bret figures the best way to get his $1,000 back is to help Bemus and Gimbel take out Scratch so Scratch can't back up Modesty.

Bret's new scheme involves polishing his boots with shoe polish, smoked fish, and catnip. He also paints all of the cats black (Scratch won't allow black cats in Paradise because of that superstition thing) and walks out on the street after Bemus challenges Scratch to a gunfight. Scratch is distracted by the black cats, and Bemus finally shoots him dead. However, Modesty has escaped with the money.

Later, Bret runs into Modesty on a riverboat. She reveals she lost the money playing poker, jumps into the river, and Bret saves her. In the end, the two of them sit on shore and count the drying money, and a black cat crosses their path.

(I often watch Maverick on MeTV, and the station cut out the opening scene where Bret finds Modesty preparing to drown herself in Sacramento Bay because she had her initial funds stolen. The opening scene explains her suicidal tendencies at the end a bit better.) 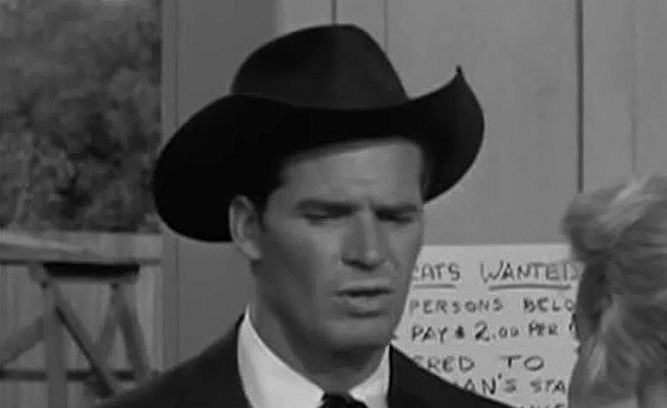 There's a lot of comedy in "Paradise", and the stakes are never high: The whole thing is tied together by James Garner at Bret. Garner has the same long-suffering reactions he had in many episodes of The Rockford Files to his high-energy guest stars. He reacts better to people he's developed a rapport with, and Modesty would return in two future episodes (although one of them is Bret-less, and the series finale). Garner has more fun with actor Fuller, which is a shame since Scratch ignominiously shoots Jack dead. Most of the gunfighter types on Maverick are idiots and/or obstacles, so it's a shame to see one get killed after he demonstrates he's as smart as a Maverick. It's a tough call, but I would have rather seen Jack continue than Modesty.

Ebsen isn't particularly funny, although his blatant attempts to avoid looking at the cemetery as he rides past are amusing. Bemus is a self-admitted slow gun, and Richard Deacon (who played a recurring character on The Dick Van Dyke Show) appears late in "Paradise" but hams it up in every scene he's in. His Gimbel gets some cute lines about being an undertaker. Like how everyone stops by the cemetery eventually, when Bret notes how many people use it as a rendezvous. 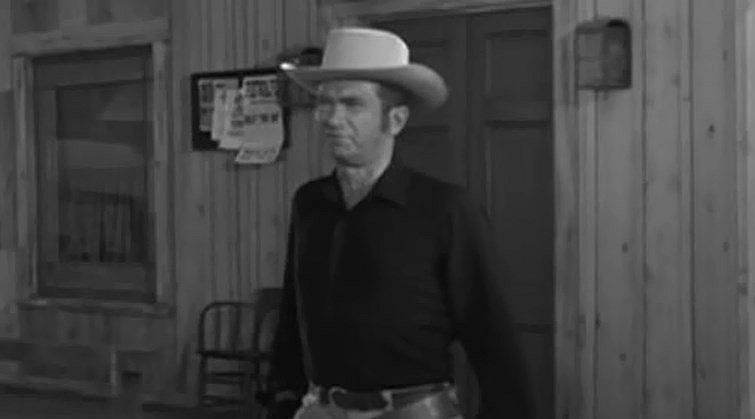 I also like how Bret could care less about bringing truth and justice to Paradise. He's only interested in getting his money back, and sets it up so Bemus gets the credit for killing Scratch. All Bret does is wear cat-attracting boots and paints cats black: he doesn't shoot it out with Scratch at the end. It makes a change from Bret's earlier appearances, when he often is portrayed as the hero because Maverick is a 50s TV Western.

Modesty makes an interesting presence, and you can see why the creative team brought her back later. I don't recall her being as memorable in her second episode, "Cruise of the Cynthia B", where she's haplessly conned into buying a cursed riverboat, same as Bret. I wish they had brought her back for more episodes and let her run rings around Bret the same way she does in "Paradise".

Overall, "Paradise" isn't one of the best-known Maverick episodes. But it manages to distill what most people think of Maverick into one episode, even if they don't realize it until afterward. And that makes it a keeper.