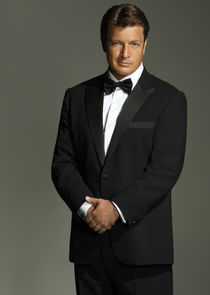 Roguish best-selling author, Richard Castle is the consummate man about town. He is nearly as well known for his tabloid-generating antics as for his immensely successful novels. Living with his teenage daughter and mother, Castle's life is never short on drama, but after killing off his most famous character, Derrick Storm, Castle was in desperate need of inspiration for this next book series.

When a serial killer began staging murders which copied the murder scenes in his books, Castle was pulled in by NYPD Detective Kate Beckett to consult on the investigation. It was then he discovered the perfect muse for his new book series, and a new calling. Turns out all those years of research for his crime novels paid off, as Castle used his unique knowledge and skills to help bring the killer to justice. In the aftermath of that case, an unlikely but valuable partnership was formed.

Since joining the ranks of the 12th precinct he's proved to be an invaluable asset to Detective Beckett, as well a charming thorn in her side. Despite, or perhaps because of, the tension between the pair, there's little doubt that Castle has found in Beckett much more than just a muse.