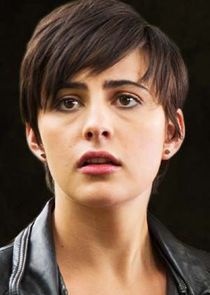 Theresa "Trubel" Rubel (born April 29, 1993) is a Grimm and member of Hadrian's Wall who first appeared in "Nobody Knows the Trubel I've Seen". Before meeting Nick, she had never benefited from a guide to explain the implications of her Grimm status to her. She has battle scars on her back and side.