And so the Doctor finds herself leaping from time zone to time zone, striving to put right what once went wrong.

Okay, so it's the opening from Quantum Leap. But "Rosa" sure seems like an episode of Quantum Leap. One of those with the Evil Leaper. And admittedly, Sam didn't have three companions. But it sure has the feel-good blues-singing attitude of the Quantum Leap episodes that had Sam jumping into the 50s and dealing with racial prejudice.

It does work for "Rosa", however, in a way that is hard to imagine with any of the previous nu-Who incarnations. Or even the older ones. Could you imagine Tom Baker and Leela trying to do what Thirteen does here? Leela would have had that bus driver gutted before he could say boo. 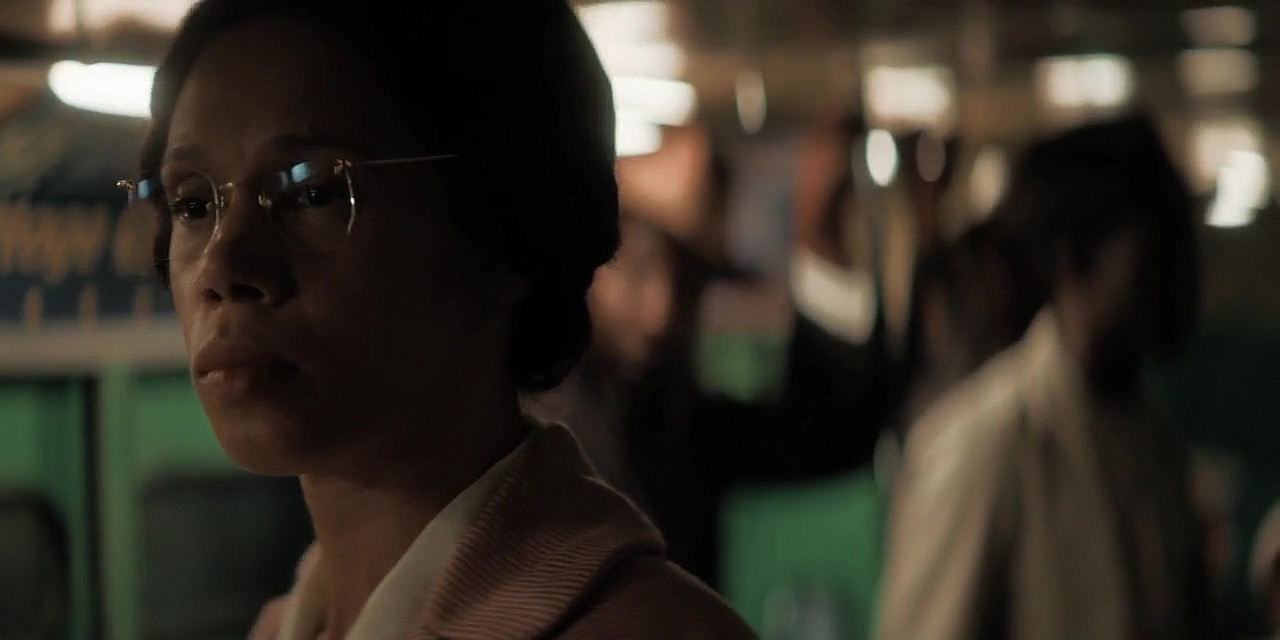 But that assumes you know what happens. Let's recap. The episode starts rather confusingly in 1943 Montgomery. Rosa Parks (Vinette Robinson) gets on a bus, the seats are full, and she has to sit in the back. The bus driver James Blake (Trevor White) makes her stand. When she refuses, Blake kicks her off the bus. Neither Rosa nor Blake look twelve years younger than they will for the rest of the episodes. And while it's possible that Blake just happened to be the driver when Rosa just happened to get on the bus twelve years earlier, it seems a bit coincidental. It seems like they could have just set the opening in the "present" of 1953 and presented the events as the original timeline.

But they didn't. The episode jumps to 1955 Montgomery and the TARDIS arrives in an alleyway. The Doctor, Graham, Ryan, and Yasmin wander around and encounter 1955-style good ole Southern bigotry. One man punches Ryan for daring to lay hands on his wife. Rosa intervenes and they meet her. The group get kicked out of a bar. And the Doctor picks up traces of artron (i.e., temporal) energy.

During this, a guy in a 50s greaser jacket and jeans finds the TARDIS, recognizes it, but is unable to get in with his future tech.

The trail leads them to a bus company. There's a cloaked suitcase containing more future tech. The greaser, Krasko (Joshua Bowman), arrives and fires at them with his future tech. They run, but the Doctor has taken the spare battery and figures Krasko's gun is recharging. They have an enigmatic conversation and the Doctor spots the vortex manipulator (i.e., crude time travel device) on Krasko's wrist. 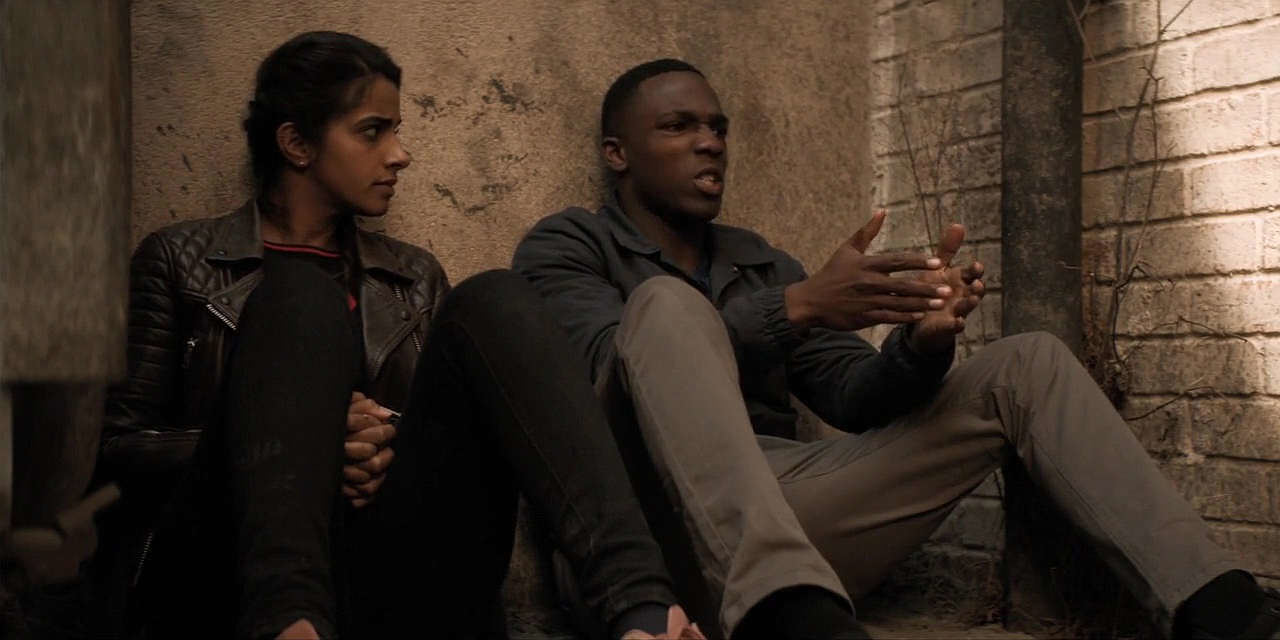 The team then break into a motel room rather than go back to the TARDIS because Krasko is watching it. Why they don't just get a room normally and then sneak Ryan and Yasmin in via the bathroom window, I don’t know. A policeman tracks them there but doesn't seem worried about why they're in an unrented motel room. Ryan and Yasmin duck out the window I just mentioned, hide behind a dumpster, and talk about racial prejudice in their own time.

Eventually the Doctor works out Krasko is an ex-con from the future. He's realized history can be altered by tiny changes (duh!) and has come back to 1955 to prevent Rosa from being arrested. Where Krasko got all of his future tech, I don't know. Rather than just say he can't alter history by killing Rosa because it wouldn't be a "tiny change", the Doctor says that he has a neural inhibitor that keeps him from committing violence. His "gun" is a temporal displacer, but he never seems to use it as such and it's not clear if he can use it effectively due to the inhibitor.

Ryan follows Rosa and arrives at her home. She's meeting with her husband and Martin Luther King, and Ryan is all tongue-tied. We get several mentions of his grandmother Grace and how she was big on Rosa and King.

The group realize what Krasko is up to, and he's already set his plan in motion. He's gotten in at the bus company, given Blake the day off because Blake is a bigot, and put up suspension of service notices along the bus route. The group tries to put history on its proper path. Ryan and Graham tells Blake that Negroes are staging a sit-in. Yasmin stays at Rosa's side to make sure she gets on the bus. Later, Ryan runs along the bus stop to make sure the passengers don't walk away. That'll make sure the bus is crowded enough that Rosa would have to stand and refuse to.

As Ryan returns, he finds Krasko blocking the road with his car. The Doctor grabbed Krasko's temporal displacer earlier, and Ryan took it. Krasko makes some remarks about how Ryan's "kind" won't get uppity, and Ryan shoots him into the distant past.

In the end, everything goes almost according to plan. However, the bus is three passengers short, so the Doctor, Graham, and Yasmin have to stay in their seats so that Rosa is forced to stand. Blake calls the police and has her arrested. In the end, the Doctor tells her companions Rosa goes on to inspire bus boycotts through Montgomery, get a Congressional Medal of Honor, and have an asteroid named after her. The end. 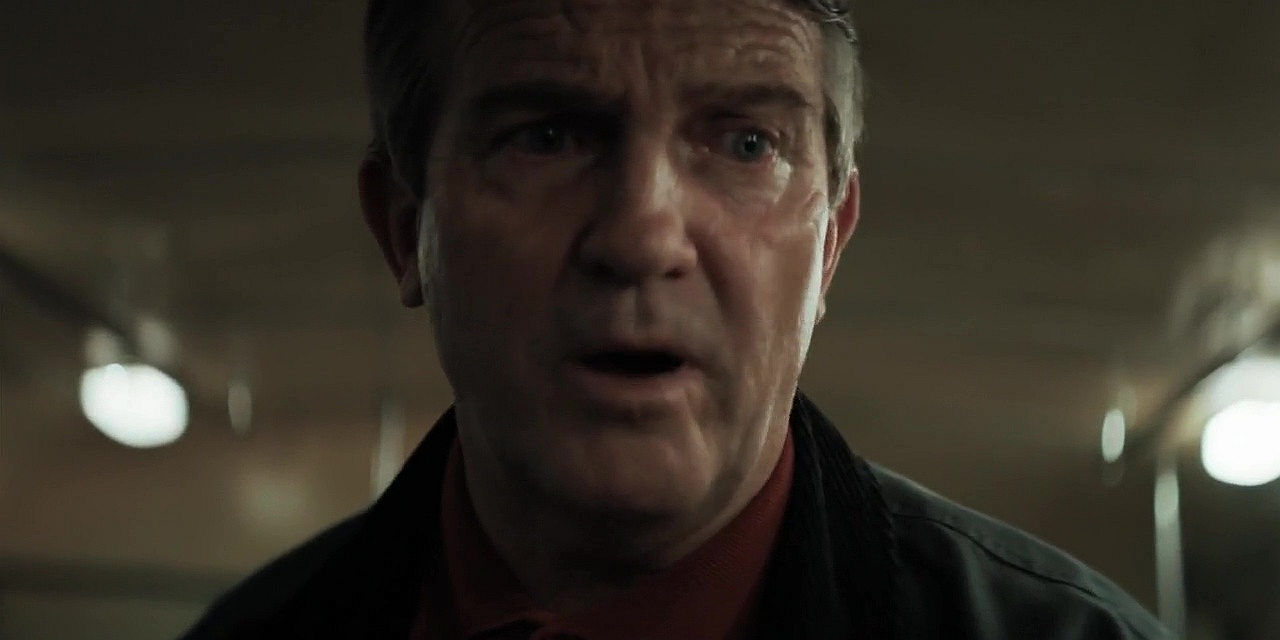 "Rosa" is an... okay episode. It feels very Quantum Leapish, what with the Doctor & Co. attempting to keep time on track. It does feature them having to do something unpleasant to keep history intact, which I don't recall QL doing very often if at all. To the show's credit, Graham (Bradley Walsh) really sells the moment when he realizes what they have to do and plaintively says that "I don't want to be part of this". It's a conflict I don't think Sam Beckett ever had.

In fact, Bradley Walsh is probably the best part of the episode. Like Bernard Cribbins before him, it's nice to have an older gent on the show who tends to focus on the things that really count. Like eating regularly. Graham is also the "white man" who has to do a lot of footwork for the group since he's the only one who blends in.

Mandip Gill still doesn't have a lot to do as Yasmin. Ryan (Tosin Cole) gets most of the "brush with history" moments, and it's amusing to hear him calling Parks and King by their full names. 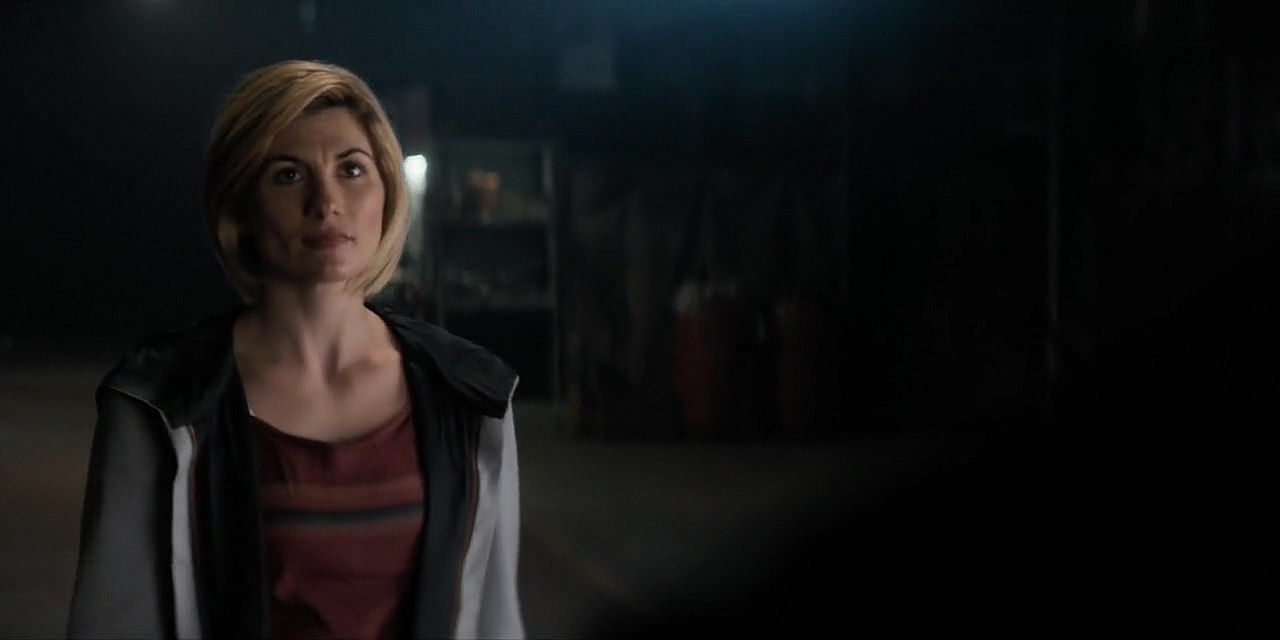 As for Whittaker's Thirteen, she's... okay. As I've noted before, the gender swap really doesn't make any difference to much of anything. There's a throwaway line or two--like when she says she's still not used to be calling "ma'am"--and I suppose you could say it's a kinder, gentler kind of story. So far there's no Autons or Cybermen or Daleks blasting away. That's as much due to the editorial approach taken by showrunner Chris Chibnall and company as Whittaker's interpretation. The script helps her out: Krasko's gun is more inconsistent than Brainiac-5's pizza boxes on tonight's Supergirl. If every Dalek ran out of energy ammo whenever the Doctor confronted them, she'd look good compared to them, too.

There are the usual statements against racial prejudice and equality (spoiler: prejudice is bad) and all that good stuff. They did much the same thing on Supergirl tonight, as I comment earlier in my review of that episode. "Rosa" has several advantages. For one thing, it's not quite as blatant. And while both shows wear their hearts on their sleeves, "Rosa" is a more... British look at American racial bigotry. They do acknowledge that there was and still is racial bigotry in the UK in 2018. But for the most part "Rosa" feels more like a third-party look at prejudice, rather than the more "personal" feel of Supergirl.

Krasko is pretty weak sauce as a bad guy, but I suppose they needed something to alter history so that they had to change it back. I don't recall them almost ever worrying about what altered history in the first place on QL, but this is Doctor Who and we haven't had a "straight" historical since "Black Orchid" in 1982. So a bad guy is needed. Krasko can't do anything violent because of the inhibitor. He never does get to hit anyone with his gun, even if he could due to the inhibitor. It overheats after he shoots it at the Doctor one time, although earlier he got off four shots.

Krasko seems to be omnipotent in his efforts to stop Rosa, but we're never told how. He says he killed two thousand people, but we never find out who or why. We're just told he was rehabilitated: you can be rehabilitated for killing two thousand people? The audience also never gets any explanation for his prejudice. Or even acknowledgement of it until his final showdown with Ryan. Krasko hates blacks and that's it. It seems an odd attitude for anyone from the distant future, what with all the aliens and cyborgs and such.

In fact, it seems like Krasko has "time", or what some writers call "temporal inertia" on his side. Haven't they established on Doctor Who that it's hard to change time, and you have to work at it? Here it seems easy to change history and the Time Team have to work hard to get it back on track. 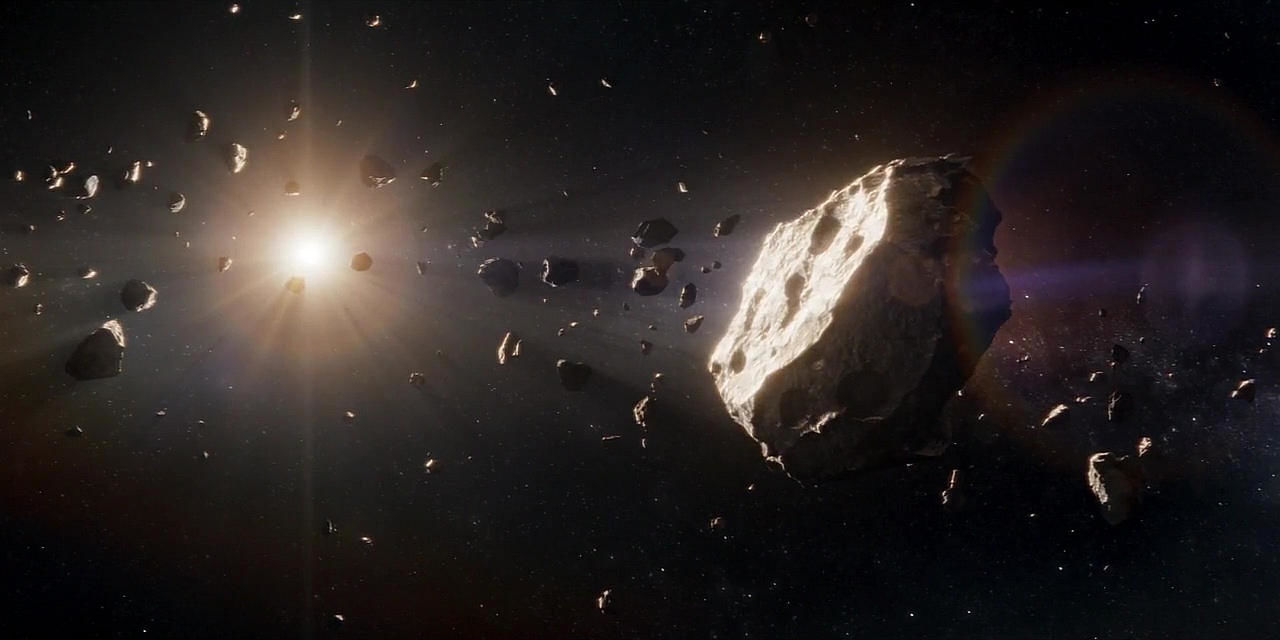 The ending is also a bit of a flop for me. So in the end, Rosa got an asteroid out in the middle of apparent nowhere named after her. An asteroid?!? Not exactly the Lincoln Memorial, is it? Or even the Ronald Reagan Airport. But a large piece of space debris.

"Rosa" seems like the kind of episode that a lot of people think is important because it's takes on prejudice and bigotry. But I've watched a lot of TV, and it's taken on a lot of prejudice and bigotry. QL started in 1989, and Star Trek was preaching against bigotry way back in 1966 ("Balance of Terror") or 1969 ("Let That Be Your Last Battlefield"). Depending on how precise you want your allegory. It's not something that Doctor Who does, sure. But let's not dilute the message. To paraphrase what someone or another once said, "When everyone is anti-bigotry, no one will be." Sometimes TV seems to thrive (i.e., keep on doing it since at least the 60s) on keeping bigotry alive so that it can rely on anti-bigotry to be hailed as "special". It'd be great if TV somehow "solved" bigotry. But 52 years later, it hasn't.

If you want to see an example of something that just tells a damn story and ignores the bigotry anvil, check out The Twilight Zone's "The Big Tall Wish".

"Rosa" succeeds on is character moments rather than its overall contribution to the Doctor Who mythology. Or being a rousing runaround. Or an action-adventure tale. Or much of anything. It's just a good basic time-travel story that gives all of the main characters something to do. And sometimes that's enough.

So dull. One of the wors episodes of DW so far. The important historical characters, who suppose to stir up sympathy, are bleak and not interesting at all. And the villain is just ludicrous, like a cartoon character. And deep as much.

Not a big fan of this episode, to be honest. It didn't feel like I was watching Doctor Who at all, more like an episode of Timeless or, as you mentioned, QL.

Don't get me wrong, the actual scripting, photography and acting was as good as always. Just, no. It's not what I expect from Doctor Who.