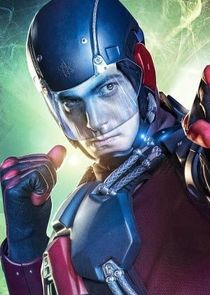 Dr. Raymond "Ray" Palmer (born 1981) is a businessman and the CEO of Palmer Technologies, formerly Queen Consolidated. Ray was engaged to marry the late Anna and later dated Felicity Smoak, a clandestine member of Team Arrow, although the relationship did not last. Having designed a powerful exosuit, he began acting as a vigilante in Starling City, calling himself The Atom. While testing out a new function of his exosuit, Ray accidentally caused an explosion which shrunk him to miniature sizes but he was believed dead. After months Ray managed to contact Felicity but was captured by Damien Darhk for his technology. However thanks to the efforts of Team Arrow Ray was rescued and continues to aid Team Arrow.

He was recruited by Rip Hunter to join his team of heroes to fight villains across time.and eventually defeat Vandal Savage.